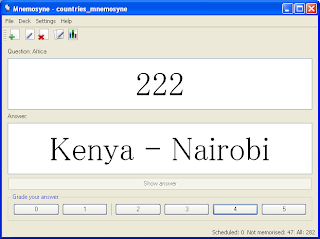 The Mnemosyne program is a free, open-source tool for memorising question/answer pairs. It uses a sophisticated algorithm to schedule the best time for a card to come up for review. Difficult cards that you tend to forget quickly will be scheduled more often, while Mnemosyne won't waste your time on things you remember well.

The software runs on Linux, Windows and Mac OS X and can be downloaded from the Mnemosyne project page. A discussion forum is available and users have contributed a variety of card decks for study, especially language. Personally, I prefer to prepare my own flash cards based on the material I am memorising.

An earlier flashcard program is SuperMemo. The web site has some very useful articles on spaced repetition and myths about memory and learning. Unfortunately the program's user interface looks awful.

I also trialled the Anki program but encountered some issues opening my card databases on a USB. After two failures I abandoned the program in favour of Mnemosyne. A flashcard program has to be used for many months and the research behind Mnemosyne appears more rigorous.
Posted by Caveman at 7:03 PM