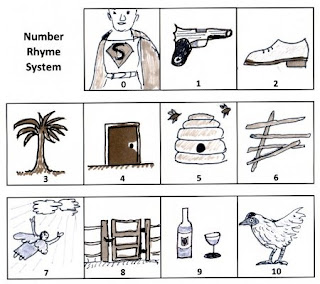 Our lives are full of numbers. Telephone numbers, building access codes, PIN numbers for our bank cards, passport number, and so on. The problem with numbers is they are not easy to visualise and remember. You probably remembered your telephone number by rote learning.

Numbers are just numbers. They don't have personality or strong visual imagery. This is where the number rhyme scheme comes into play - a system where each number from 0 to 10 has an associated rhyming word.

Say the numbers from 0 to 10 out loud and see which word comes to mind. The drawing above shows the numbers that came to my mind along with a drawing of that image. Here are the numbers and words:

Now that I have a series of strong mental images, I can use them as mental pegs for making associations. The items to be remembered are associated with the number rhyme image and the item to be remembered.

This system is very useful for when you suddenly think of something you need to do. For example, once when I was on a walk I remembered a few things I needed to do. I associated each item with a number in sequence and I don't need to write anything down. However I start the numbering from one (the gun).

For example, if I wanted to remember the following chores to do at the shops:
Post a letter (1)
Buy a loaf of bread (2)
Visit the Medicare office to submit a medical expense claim (3)
Buy a newspaper (4).

I could imagine the following associations: Using the GUN, I walk into the post office and fire bullets at a target on the wall. My LETTER is pinned on this target. Using the SHOE, I walk on the dough being used to make BREAD. In the TREE, there is a large stethoscope (reminding me of a doctor) hanging from a branch. Attached to this rope-like stethoscope are medical receipts attached with hypodermic needles. On the DOOR is pasted the front page of the Sydney Morning Herald. The entire door has been wall papered with newspaper.

The number rhyme system is a useful method of remembering short lists of items for relatively short periods of time. You can't use the list for multipled lists as your memories will get jumbled. There are other systems for doing this, such as the Major System and the Dominic Number system which I will write about later.

There is also a number shape system where the key images are derived from the shape of the number. For example, one looks like a candle and four looks like a yacht. I will write about this system in a later post.
Posted by Caveman at 4:10 PM