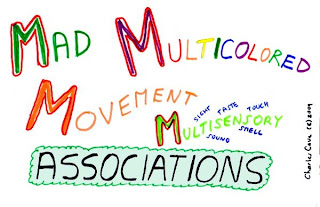 In an earlier article about the number rhyme system, I gave examples of how I would make asssociations with the peg words and my shopping list. I had four items to remember: Post a letter, buy a loaf of bread, collect medical benefits from my health fund, and buy a newspaper. The pegwords for the first four numbers are gun, shoe, tree and door.

My suggested associations were walking into the post office and fire bullets at a target on the wall on which was pinned my letter. Using the shoe, I walk on the dough being used to make bread. In the tree, there is a large stethoscope (reminding me of a doctor) hanging from a branch. Attached to this rope-like stethoscope are medical receipts attached with hypodermic needles. For the fourth item on my list, the front page of the Sydney Morning Herald is pasted on a door. The entire door has been wall papered with newspaper.

I received feedback from my friend Dilip Mukerjea (owner of 'Braindancing International' and the Buzan centre in Singapore) encouraging me to create wilder associations. These are his suggestions.

Just a thought for you. I strongly recommend that your associative imagery NOT be as 'logical' as you have depicted. My preference is, for easier recall, that the imagery should be:

Mad (incongruous), NOT at all logical, though you have introjected a certain amount of welcome illogicality (e.g. shoe on the dough. For me it would be shoe on the dough and with each step the dough animatedly metamorphosing from shoeprint into dough shoe in the shape of bread loaves!)

Movement (animated) (e.g. I would prefer the stethoscope if it were going into a manic dance mode, wrapped around a 'medic in the air' (medicare) so that the entire tree was shaking (note the real-time "-ing" factor). Perhaps the stethoscope is dropping off dollar notes for the payment that is due to you.

The medical receipts bit is great. Thus, by this logic also, your number 1, 'gun' could be going 'ballistic' by firing the letter(s) from its barrel into a letter box at the post office as opposed to being static on the wall, being fired at. The animation effect enables recall to be easier as the brain emerged and evolved in response to the need for movement and locomotion.

Multicoloured - get psychedelic and infuse your imagery with dazzling colours.

Multisensory - Have your medical receipts screaming "Pay me! Pay me!" or some such thing. The shoe on the dough could be taking a zigzag pattern and steaming aromatic odours, squeaking melodiously, breathing, changing colours with each breath, etc.

I have made the above four elements easier for you to recall by using the letter 'M' for each of them, so that you can visualise their behaviour - they work very well for me.

Anyway, hope this is of some help. Each person has their own preferences, especially when it comes to activating the association cortex! The above might look elaborate in the beginning but gets 'automatic' in time as you must already know.
Posted by Caveman at 3:08 PM