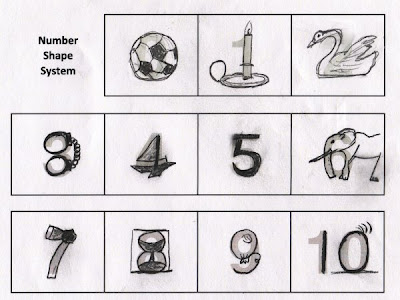 In an earlier post I wrote about the Number Rhyme system for converting numbers into memorable images. This required thinking of a word that rhymes with the numbers from zero to ten.

The Number Shape system requires you to think of something that looks like the number.

Look at each number in turn and think what it looks like. This is my list which I have attempted to illustrate above.

The numbers can be used as pegs for associating information just as I described in an earlier article on Number rhymes. A useful application of the Number shapes is explained in Dominic O'Brien's Quantum Memory Power CD set.

When you need to remember numerical information, use the Number Shape image. For example, to remember that Mars has 2 moons, imagine a swan flying gracefully around the planet Mars.

To remember there are 4 horses on a polo team, imagine a sailboat sailing around the polo field with the players hitting the boat.

To remember that Santa Claus's sled is pulled by 8 reindeer you could imagine Santa holding the hourglass shouting out "We're running late!". If you had used a snowman as an image for the number 8, then your mental image would be much easier.
Posted by Caveman at 5:31 AM