How to remember a deck of cards 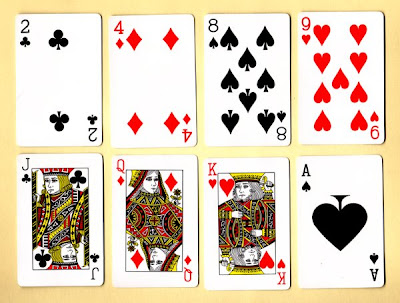 If you were given a pack of 52 shuffled playing cards, could you remember the sequence of cards? Does this sound impossible?

Memorising a card deck is part of Memory Sports and you could do it as well. There are two main skills required - developing a strong mental image for each card, then memorising the sequence of cards using a journey of 52 stages.

A playing card belongs to one of the four suits - Clubs, Hearts, Spades and Diamonds and is going to be a number between 2 and 10 or a Jack, King, Queen or Ace.

We explored the Journey method in an earlier article, but how can we make cards memorable? I chose the method described by Harry Lorayne in his book "How to Develop a Super Power Memory".

Each card is converted into a key image (known as a 'peg word') based on the suit and the value according to a pattern.

Every peg word begins with the initial letter of the card suit. Therefore all the words for the Spades suit begin with S, Diamonds with D, Clubs with C and Hearts with H.

The peg words for the Jack is the suit itself, so the Jack of Diamonds is a "diamond".

The peg word for the King is a word that sounds like King and starts with the first letter of the suit, so we have King, Hinge, Sing and Drink.

The peg word for the Queen is a word that sounds like Queen and starst with the first letter of the suit, so we have Cram, Queen, Steam and Dream.

A mnemonic for remembering the four suits is CHaSeD (Clubs, Hearts, Spades and Diamonds).

Here are my peg words which I based originally on Lorayne's list, then I modified to my own preference.

Clubs
Hearts
Spades
Diamonds
Now you will need a Journey of 52 stages to locate the cards in turn.

Practice using one suit of cards, then two and work your way up to the full deck. By the way, the world record for memorising a deck of cards is under a minute! With practice you should be able to memorise a deck of cards in under five minutes.

Now that you memorised peg words for the playing cards, you can use these images for other card games. In a later article I will write about "Memory" - a game of matching pairs of cards.
Read more about remembering cards at the Memory Sports web site.
Posted by Caveman at 4:13 AM