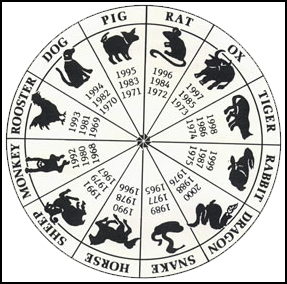 According to Chinese tradition, 2009 is the Year of the Ox. The City of Sydney as well as any city with a large Chinese population celebrates Chinese New Year with a big festival.

The Chinese Zodiac has a cycle of 12 years with each year having an assigned animal. Each sign represents a different personality. The Zodiac traditionally begins with the Rat, so here is the sequence starting with the rat and the corresponding years.

I wanted to memorise these twelve signs and their associated years using the memory techniques I have described in earlier articles.   First of all, what needs to be memorised?  There are two sets of information - the twelve animals in sequence, and their corresponding years.

A story could be created linking the animals together, starting in 2008. In Chinese culture, 8 is a lucky number so maybe a large pot of gold could be associated with the Rat, Dragon and Monkey since their years are multiples of 12. Converting a year to an animal would require recalling the sequence and counting the steps to find the year.

Can you devise a story starting with the Rat in the year 2008?  Rat, Ox, Tiger, Rabbit, Dragon, Snake, Horse, Goat, Monkey, Rooster, Dog and Pig. Post your story in the comments and I will write a followup article next week.

I decided to use my Peg words for the numbers 8 to 19 and associate the peg word to the animal. I have included a link at the end of  this article if you are not familar with this system. Here is the list of years and my peg word.

Since all of the years are in the 21st century I only need to use the last two digits of the year to create a peg word.

The number 8 is lucky in Chinese tradition and a good way to remember the start year for the animal sequence. Because the information being memorised is Chinese I have added the colour red to the imagery of my associations.

2008 ivy  Rat - a rat is climbing up a red ivy plant. The ivy is entwined in the rat' stail.
2009 bee - Ox - a giant red bee is swooping down on to the ox and stinging him on the behind.
2010 toes - Tiger - large red toes are walking quietly in the jungle. The toes belong to a tiger.
2011 tot - Rabbit - a red baby is cuddling a large soft toy rabbit
2012 ton - Dragon - a red one ton weight is being blasted by the flames from a dragon's mouth
2013 dam - Snake - a giant red snake is slithering up a river valley towards the dam
2014 tyre - Horse - a large red tyre is hanging around the horse's neck
2015 towel - Goat - a red goat is chewing a large red towel, ripping it to shreds
2016 tissue - Monkey - a monkey is blowing his nose with a large red tissue
2017 tack - Rooster - a rooster has large red tacks instead of claws, as well as a red tack protruding from his beak.
2018 dove - Dog - a dog is chasing a flock of red doves, and attempting to catch one of the birds.
2019 tap -Pig - a large red tap has been turned on and a thick sludge comes out into a trough for a pig.