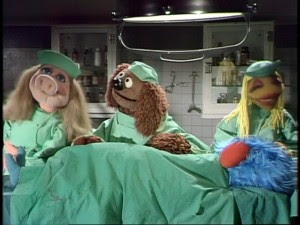 Doctor Bob from The Muppets - my key image for people named Bob
Nowadays it is more common to be dealing with people on a first name basis. The memory books by Harry Lorayne which have been my main reference on memory skills emphasise surnames.

Usually I don't have a problem remembering surnames because they are fairly unique. My big challenge is when I am introduced to a group of people with popular names. Men named Bob, Chris, David, Mike, Rick, Dan, Tony, Terry and Jack. Women named Sue, Julie, June, Sharon, Debbie and Amanda. I know many people with these names, and I find it hard to make the names unique.

There are several techniques for remembering given names, and I will describe two of these methods.

1. Asssociate with someone with the same name

The first method is to picture someone you know well with the same name, then associate that person with the person you are meeting. For example, you could be introduced to a fellow named George. You identify a distinguishing feature of George's face then associate that with George Bush.

A variation on this technique is to imagine the new person doing something associated with the person who shares the same name. For example, there is a fellow at my office named Bob. I have given him the name Doctor Bob after the character in Sesame Street. Nicknames can be useful for remembering names but fraught with danger which I will write about later.

The second method for remembering first names is to use a substitute word. These are generally easy to find, for example Harry could be "hairy", Clark could be "clock", Anne is "Ant" and Cate could be a cat.